The Porsche Supercup has been one of the most famous and at the same time the most demanding racing series in the world for 30 years. Racing the new 911 GT3 Cup at legendary circuits such as Monte Carlo and Silverstone as part of the F1 Grand Prix support program is a dream come true for many drivers. The organizers of the International Cup decided to mark the special anniversary with a special “gift”: Porsche Motorsport project managers commissioned Porsche Exclusive Manufaktur to comprehensively personalize the already produced 911 GT3 based on the 911 GT3 Cup. The car received special colors in honor of the 30th anniversary of the Super Bowl.

A unique replica was created within the framework of the new Sonderwunsch program in less than 6 months as "Sonderwunsch Factory Restoration". It combines the redesign of an already produced Porsche production car with additional individualization – in other words, technical modifications go hand in hand with a change in the color concept of the exterior and interior. In the case of the anniversary 911 GT3, a striking eight-colour lacquer was used, combined with a special logo and pixelated graphics, including on the rear fenders. The names of all 29 Porsche Supercup champions to date are written in gold on the rear bumper. 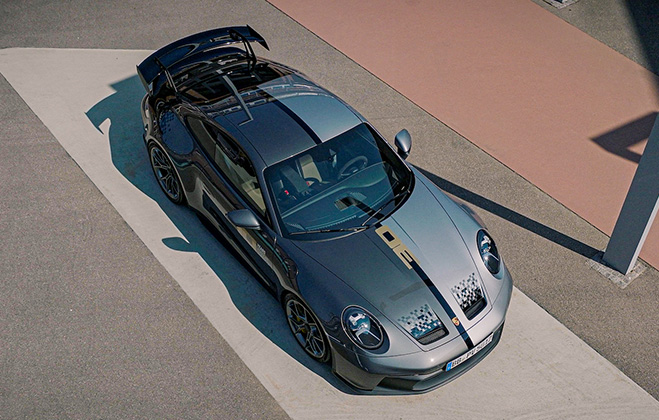 “Each Sonderwunsch project is unique not only for the customers, but also for us,” said Alexander Fabig, Vice President Personalization and Porsche Classic. “New projects are new challenges, and every time we learn something new. This also applies to the 911 GT3 created for the 30th anniversary of the Porsche Supercup.”

“A tight schedule, high technical standards and a great team spirit that always leads us to the finish line in the end is something I have only seen in the world of motorsport so far,” said Oliver Schwab, project manager for the Porsche Mobil 1 Super Cup. . “It was a pleasure to work with Porsche Exclusive Manufaktur on this assignment. And the 911 GT3 for the 30th anniversary of the Porsche Super Cup is a worthy representative of our Cup this anniversary year. The Porsche Supercup left its mark on the history of motorsport - and that's not all. We say 'all the best' and look forward to many more years of racing on the world's most famous racetracks."

First of all, a special car will be presented at the Porsche Mobil 1 Super Bowl. It will also be on display at the Porsche Museum and CityLife Showroom in Milan from the end of summer along with the VIP 911 GT3 Cup car, which is a key communication element of the Porsche Supercup. It features a famous guest contestant (or contestant) each season. In addition, ex-Superbowl champions will go on tours in the 911 GT3 Sonderwunsch to talk about their triumphs and share special memories.

Individual modifications of the exterior and interior

Sonderwunsch's post-factory order was based on a production-ready Porsche 911 GT3, a road version of the racing car used in the Porsche Supercup. Within a few weeks, the car was first dismantled and then specially upgraded.

911 GT3 painted in multicolour for the 30th anniversary of the Porsche Supercup. This means that there is no film or sticker on the body. In total, eight shades are used here: GT Silver Metallic, Agate Gray Metallic, Black High Gloss, Meteorgreymetallic, Parliamentgreymetallic, Volcanogreymetallic, Grigiogranitometallic and Diamondblackmetallic. The same goes for the golden names of the 29 previous Super Bowl winners; they are protected with a colorless glossy varnish. 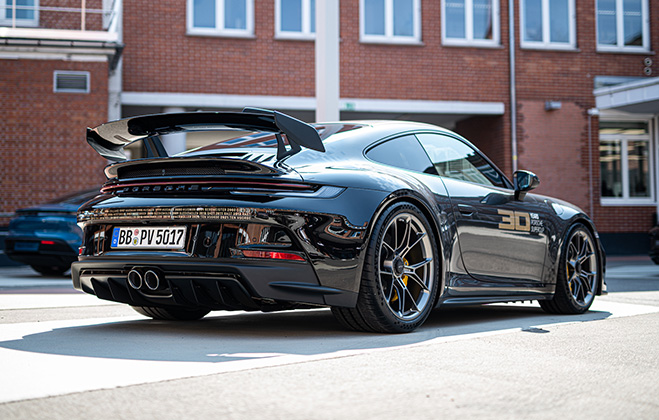 The biggest challenge during the painting process was accurately applying the colored pixel grid to the body panels with their distinctive contours. The VIP-inspired design is found behind the air vents in the front hood, behind the front wheels and on the rear fenders. An anniversary logo in the form of a large golden number 30 is printed on the door and front cover. After painting, the car was hand-assembled at the Porsche Exclusive Manufaktur factory and completed with additional Sonderwunsch options.

In the cabin, special attention is drawn to the seats with the anniversary logo on the headrests, designed in independent colors. The black and gold Sport-Tex material on the middle panels and the matching Mojave Beige color trim give it a unique character.

A "rectangular" pattern in black and gold is also used on the armrests on the door panels. The instrument panel trim strip features the Anniversary logo, while the top of the cab, doors and side panels are adorned with cross-stitching in Mojave Beige.

The Porsche Mobil 1 Supercup is considered one of the most demanding mono-brand series in the world. The races are part of the FIA Formula 1 European World Championship. This year's race includes eight races, the first of which took place on April 24 in Imola, Italy. In total, 28 riders from eight teams are fighting for the title in the anniversary season. In addition to the overall classification and the ProAm drivers' table, there is also a team classification and rookie ranking. 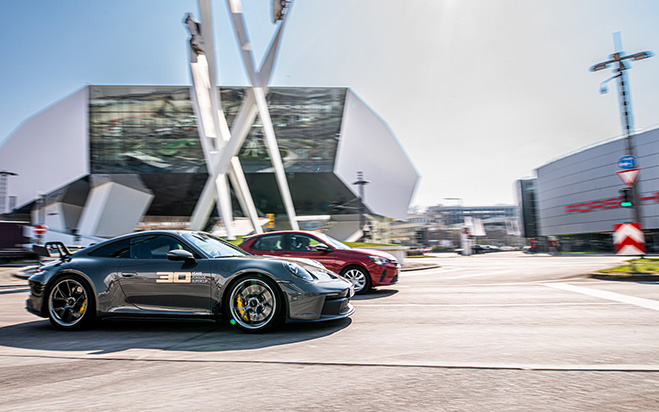 The successful and respected Porsche Junior program has served as a springboard for a professional racing career for 25 years. Many factory racers live here, including world champions and Le Mans winners. Among them: Timo Bernhard (junior Porsche 2000-2001), Mark Lieb (2000-2002) and Earl Bamber (2014) - all three won the legendary 24 Hours of Le Mans at least once and won the FIA World Endurance Championship. (WEC) driving a Porsche 919 Hybrid.

A sports car as individual as a fingerprint and as unique as its owner's lifestyle: Combining first-class craftsmanship with cutting-edge technology, Porsche Exclusive Manufaktur creates very individual cars for its customers in Stuttgart-Zuffenhausen. Highly qualified employees with years of experience pay unparalleled attention to every detail, and commissions are handed over projects with superior handcraft techniques of the highest class. Specialists have at their disposal a wide range of options for visual and technical personalization of the exterior and interior of Porsche vehicles.

As part of its Co-Creation strategy, the sports car manufacturer is reimagining its legendary Sonderwunsch program from the late 1970s, which allows for the creation of personalized, one-of-a-kind vehicles, co-designed with the customer and professionally built by Porsche. The extended offer is divided into factory orders (Factor commissioning) carried out directly during production, taking into account individual expectations in terms of colors and materials, factory recommissioning and factory one-time orders. ) - the last two are already reserved for manufactured cars. While post-factory orders concern individual colors and materials, factory-made unique pieces are based on new technical developments. 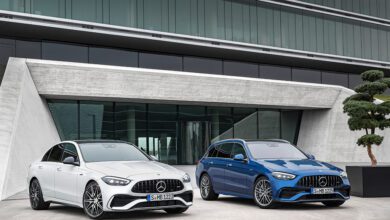 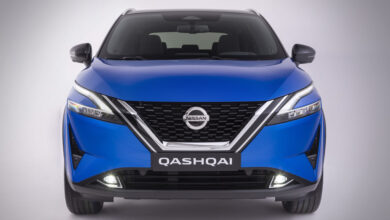 The new Nissan Qashqai is already available for real inspection 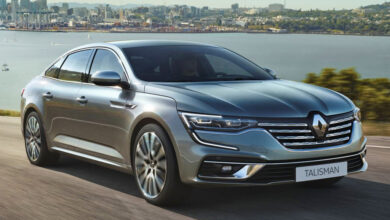 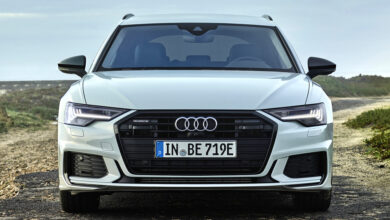 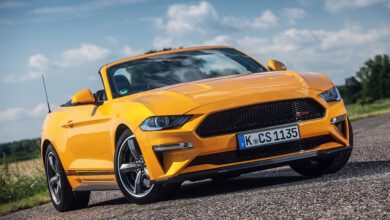 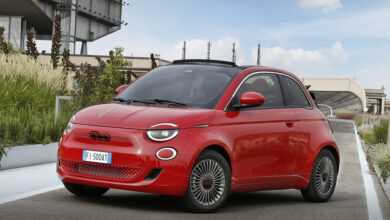