Hyundai recently unveiled the latest Prophecy electric concept, which reflects the company's design philosophy of sensuous sportiness. As with other Hyundai concept vehicles, its design is a preview of what the brand's future models could look like.

Concept cars allow manufacturers to push the boundaries of design and bring new ideas and styles to life. Many car manufacturers use concept models to test consumer response and put them into series production.

In recent years, Hyundai has unveiled a number of concept vehicles that foreshadowed the design of future production models.

The Hyundai i-Oniq, an electric sports hatchback with extended range petrol engine, debuted at the 2012 Geneva International Motor Show. Designed and engineered at Hyundai's European R&D Center, it was the first vehicle to feature the signature cascading grille. Hyundai's designers opted for dynamic proportions to create an aesthetic and functional body shape for the i-Oniq Concept. Its design is characterized by sleek lines and muscular surfaces that combine premium and sporty features.

The i-Oniq concept ushered in the IONIQ, which debuted four years later as the world's first car with three electrified powertrains. 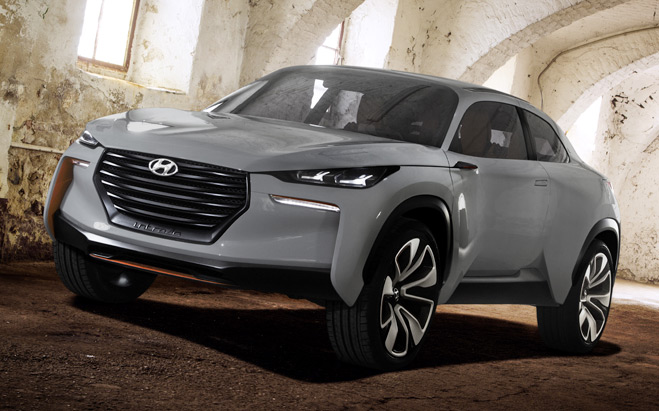 The Hyundai Intrado Concept was unveiled at the 2014 Geneva International Motor Show and set a new direction for the brand with its vision of future mobility. Intrado showed that Hyundai believes that cutting-edge technology and intelligent design can come together to create a better driver and passenger experience. The name Intrado comes from the underside of an aircraft wing, which features minimal parts and efficient aerodynamics. 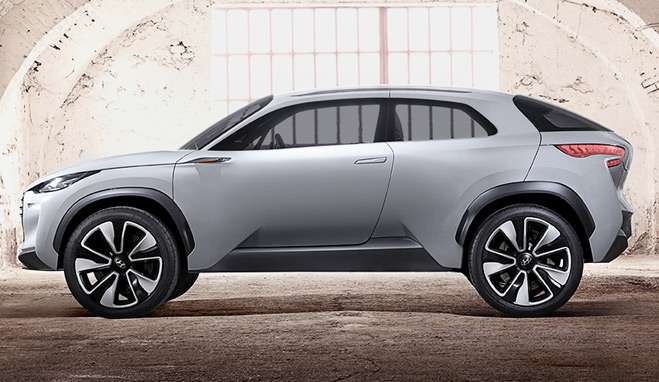 The influence of the Hyundai Intrado can be seen in the Hyundai KONA, which debuted in 2017 as Hyundai's first subcompact SUV. KONA features a bold front and back, as well as a wide silhouette and elegant and expressive shapes.

Hyundai unveiled the RN30, a motorsport-inspired racing concept, at the 2016 Paris Motor Show. The concept was developed in close collaboration with Hyundai Motorsport, the Hyundai Motor European Technical Center and Hyundai Motor's performance and performance division. The RN30 is acclaimed for its combination of aerodynamics and specialized technology, and the promise of thrilling high-speed driving.

A characteristic element of the exterior design of the RN30 are fenders hovering over each wheel, which, in combination with the side skirts, improve aerodynamic properties, while giving the impression that the car is attached to the track.

The RN30 heralded the design of the components used in both the i30 N and the i30 N TCR. There were triangular headlights, headlight contour and Performance Blue body color, as well as a roll cage in place of the rear seat, and a button with N mode.

The futuristic concept of the FE Fuel Cell was a step forward in the development of vehicles powered by hydrogen. The car debuted at the 2017 Geneva International Motor Show. Thanks to him, Hyundai confirmed its commitment to the development of fuel cell vehicles. 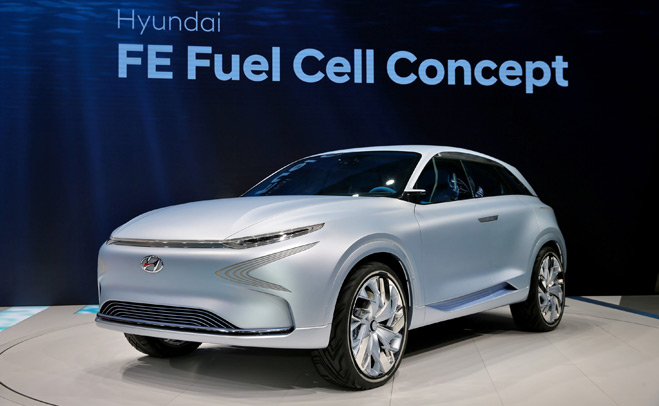 With its nature-inspired liquid form, the FE Fuel Cell concept only releases water. The minimalistic, clean and calm design emphasizes its environmental friendliness. The stylish rear spoiler with integrated air intakes has been designed in a minimalist style to improve aerodynamics through thoughtful engineering.

A few months after the FE Fuel Cell concept, the Hyundai NEXO was introduced with second-generation fuel cells. NEXO inherits the SUV silhouette and bold design elements from the FE Fuel Cell. NEXO is characterized by an organic and flowing shape, a thin floating roof that emphasizes the large glass area, and a narrow C-pillar that seamlessly transforms into a rear spoiler.

Design cues from Le Fil Rouge have been carried over to the eighth generation SONATA and the seventh generation ELANTRA.

Hyundai unveiled the 45 Electric concept at the 2019 Frankfurt International Motor Show. The Concept 45 heralds a new era in Hyundai vehicle design in which electrification, autonomous technology and intelligent design play a central role. Hyundai believes that looking back is essential to moving forward, so the car pays homage to the iconic Hyundai Pony Coupe concept that debuted 45 years ago.

The character of the 45 is expressed in a compact body, aerodynamic and lightweight design inspired by the aircraft of the 1920s. Part of the car's name refers to the 45-degree angles that define the car's diamond-shaped silhouette. We can expect the design of Hyundai's future electric models to follow this direction. 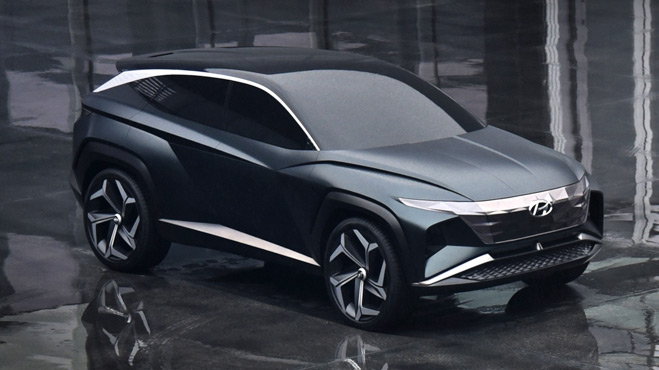 The design of the 45 eschews complexity in favor of the clean lines and minimalist structure of the original coupe concept. Like Le Fil Rouge before it, the 45 is an evolution of Hyundai's Sensuous Sportiness design philosophy. 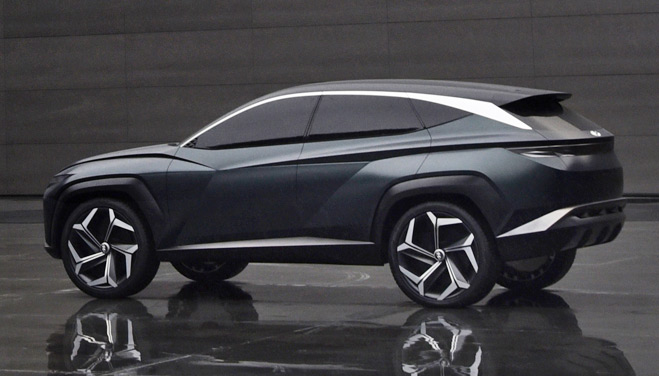 The side profile of the Vision T gives the impression of continuous forward movement. The long bonnet and sloping roofline, combined with the long wheelbase and short overhangs, reflect a vehicle that is ready for any challenge. Unlike compact SUVs on the market, the Vision T has been designed with several sharp corners and edges to create a clear contrast between elegant lines and a sporty wedge fit.

The latest Hyundai Prophecy concept car was unveiled in March this year. Unlike its predecessor, the 45 Prophecy has smooth shapes and smooth lines with virtually no sharp corners or edges. Its neoclassical shape is an homage to the luxury cars of the 1920s and 1930s, while unique features such as pixelated lighting and propeller-shaped wheels make it look like the car of the future. 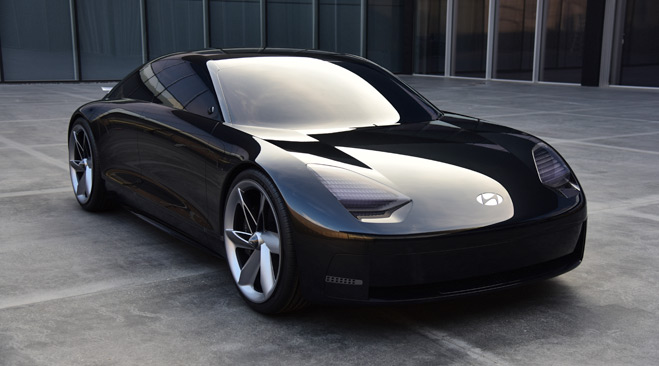 The name Prophecy clearly indicates that the car is a harbinger of future Hyundai models. Prophecy reflects the Sensuous Sportiness design philosophy and is the perfect combination of aesthetic harmony with aerodynamics. Sensual sportiness can be seen in the car's ideal silhouette, defined by a single smooth line running from the front of the car to the rear. Smooth lines and gentle curves give Prophecy the appearance of perfectly smooth stone.

MANUFAKTUR is an exclusive equipment for the individual order of Mercedes-Benz customers. 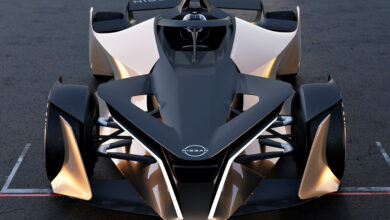 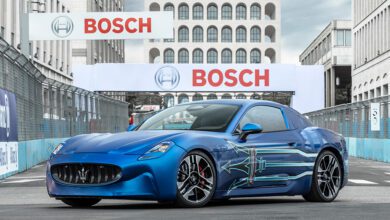 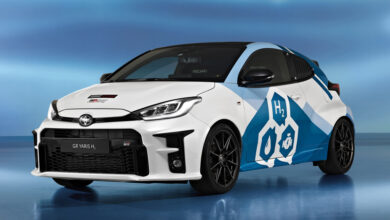 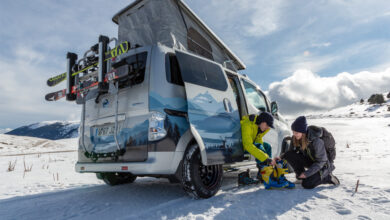 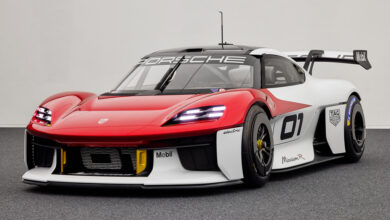